The Consequences of Divorce or Separation 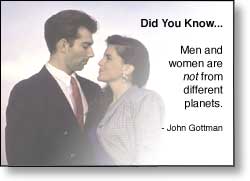 Stats taken from The Seven Principles for Making Marriage Work by John Gottman, and The Unexpected Legacy of Divorce by Judith Wallerstein.

The structure of Canadian families is becoming more diverse. The traditional family of two parents with children is no longer the norm in Canada. In 2006, legally married couples with children made up 34.6% of all families. Only 25 years earlier, in 1981, 55% of all families were legally married couples with children. While the proportion of traditional families has been declining, the proportion of common-law and lone-parent families is increasing. (For more information on family formation and dissolution and societal changes that have led to these trends, see Family Life .)

What is EFT Couple Therapy?

What are the Benefits of Couple Therapy?

How To Tell If You Need Couple Therapy?

Can We Fix Things Ourselves?

Consequences of Divorce or Separation